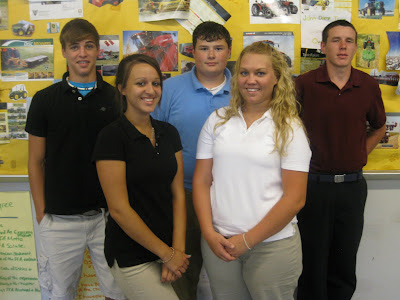 (News article written by Krista Dennis, WCHS FFA Member) The Warren County High Schools' Future Farmers of America (FFA) Chapter attended the Regional Leadership Conference on September 13, 2011 held at Millbrook High School in Raleigh, NC. The students, Krista Dennis, Hayden Sullivan, Ashley Smith, Evan Vincent, and Tyler Schlafer, along with their FFA Adviser, Tom Traylor, and special guest Celest Frisbee, attended workshops on leadership. Sullivan, Vincent, and Smith attended the same workshop while Dennis and Schlafer attended separate workshops. Dennis, current VP of the FFA at WCHS, was part of the Presidents and Vice Presidents workshop, taught by the NC FFA President John Stewart. She enjoyed the workshop, "I wished I would have gone my first three years of high school. It was great getting to meet new people and seeing the same students you run into at [Career Development Events]. I would highly recommend any student to go if they ever get the chance, even if it is not for FFA. Going to any leadership conference teaches you a lot," Dennis states. Sullivan's workshop, "..helped to make you not nervous around new people. It would give you helpful tips on how to communicate with students in your school and the people in your community. The best part about attending was getting to meet new people that had the same common interest as you, you could talk about anything and they would understand. I would enjoy to go my last two years of high school and would like to get more people to go because the more people, the more fun." Schlafer commented that his workshop, "..was more fun than expected. I was expecting an adult to stand at the front and talk but it was a regional officer that led the group. We played games and got to know each other, it made it easier to meet new people. They helped you with public speaking and getting up in front of people to speak. I would like to go next year and would like to get more people to go."
Tom Traylor and Celeste Frisbee attended a meeting between the advisers from different counties describing the funds that it took to keep up an FFA chapter and the things you go to. They discussed ways to raise money for different events and even lowering the prices to help some of the poorer counties and FFA chapters.